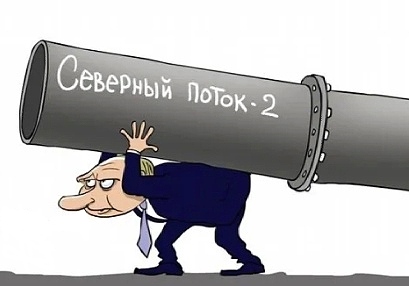 After signing the package gas agreements, it is very interesting to observe the attempts of Russian propaganda to present this event as a victory.

Kremlin requests for information propaganda are very generously paid. There will always be people for whom the phrase «money does not smell» is a life credo. The combination of Kremlin money and people who are not weighed down by moral principles gives so many lies that you can sometimes hear incredible things. A little more, and North Korea, with its victory in the World Cup and the landing of an astronaut in the sun, will be left deep behind.

But from this informational noise, a knowledgeable person can draw a lot of useful information. I will share my observations.

In this case, Putin is trying to hide the slap in the face of Ukraine, the EU, and the USA. In fact, Vova Putin was the victim of his own tactics — blackmail. He has long been accustomed to this tool but has lost control of the situation.

The case when a blackmailer overestimates the situation and suddenly receives a well-deserved kick in the groin.

A previously debugged tool began to malfunction. Vova overestimated his strength and began to lose control of the situation.

Sanctions work — Russian industry is not able to produce basic things. The lifting of sanctions soon is not expected.

If we further analyze the internal information field of the Russian Federation, we can see that Kadyrov is also starting to get out of the control of the Kremlin.

There is a loss of control in the internal and external spheres, which cannot be an accident. Putin begins to lose power.

Aggression is an emotion of helplessness. Ask any psychiatrist.

After the last “Norman Summit,” the number of shelling from the occupied territories of Ukraine captured by the Russian Federation immediately increased dramatically. Vova Putin was offended because he had lost all priority positions in the negotiations. He was forced to only make a serious face and restrain himself so as not to bite his nails on people.

But the most important thing in the signing is not that Ukraine will be paid the expected $ 2.9 billion and forced the Russian Federation to sign a transit contract. The most important thing is that in strategic matters the West began to consolidate against the Russian Federation. This is the first noticeable result on this path, but the beginning has already been made. The West moved from negotiations to a strategy of coercion. This Vova did not expect. Therefore, the summit looked very discouraged.

And now the Russian Federation is trying, with the help of not the best part of the journalistic community, to present the existing situation as the “favor” of the Russian Federation. They pay a lot of money, so the noise is very strong. Indeed, not every journalist in the West can afford such mansions as those of Solovyov and many other odious Russian journalists. It’s strange because I haven’t seen any of them among the laureates of international awards in the field of journalism or literature. Their professional achievements are very doubtful.

Such income can be explained only by one thing — they cover Putin’s bare ass.

I believe that competition in this area will increase significantly in the near future. Covering up becomes noticeably harder. It will be football on a minefield and not unpunished barking. The West changed tactics and switched to countermeasures. And this is not a joke. You have to pay for it. After all, any violation in the agreements will automatically allow Ukraine to return to claims for a much larger sum than they will pay now.

Do not twitch, Vova! It is very expensive and unhealthy!